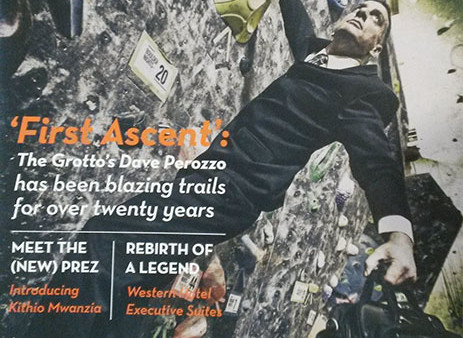 We are the featured article by Chris Tiessen in Guelph’s Moving Business Forward Magazine 2015 Issue.

Famed architect Carl Elefante, noted for a career rooted in historic preservation, urban design and sustainable development, once remarked that “The greenest building is the one already built.’

The greenest building is the one already built.

And now there’s a new (old) kid on the block – the pristinely-restored and newly-minted Western Hotel & Executive Suites – still known to many by its most recent and infamous moniker, ‘The Diplomat’.

And it means business.

It’s an example of gentrification done right; remarks Business Development Manager Mark Rodford (known by many as the imaginative owner of such fantastic establishments as The Cornerstone, Ouderkirk & Taylor, and OX). He continues: ‘We’re most definitely catering to a distinguished audience. Visiting executives and professors. Contract employees. Out-of-towners on business in Guelph for a few days, weeks, or even months who expect the swankiest accommodations situated in the heart of downtown – within walking distance of great restaurants, phenomenal entertainment, the transit hubs, cafes, pubs, bars and everything else that makes up the core of our city’.

‘It’s our hope,’ adds Mark, ‘that a few of the suites will be rented year round by area businesses and organizations that see the value of having what’s essentially a fully-furnished luxury apartment available whenever they may need it. We’ve had interest in this option already – and more rooms are still available to those companies who want something long-term.’

Until they are all gone, that is.

Which, based on the restored hotel’s exuberant quality and incredible craftsmanship, its phenomenal location, and its competitive pricing, would suggest this will happen sooner than later.

Mark concludes: ‘Basically, what we’ve managed to do with The Western is bring back a legend. It’s been lying dormant for far too long. We’ve simple woke it back up.’